HOW CAN YOU POSSIBLY TELL?

Deadpool's teleportation device will comically malfunction if you spam his teleport move. Also, he breaks the fourth wall by beating his opponents with his health bar.

nfo and notes, thanks to Feathet on gamefaqs:

Stuff in italics are direct quotes from the magazine.

--It's just Marvel Vs Capcom, absolutely nothing was said about another party. Random guy on youtube was just spouting bs.
--Sales of Marvel Vs Capcom 2 surpassed their expectations by a whole lot.
--Marvel is at it's "strongest point ever" right now, they decided it was the perfect time to create a game like this.
--Disney did not impact the project positively or negatively in any way.
--Game runs on MT Framework engine that LP2 and RE5 run on.
--From the screens, the game looks VERY VERY VERY comic book-y, it actually looks very different than MvC2 did, most of the colors are very bright, and again, VERY comic-book looking. They basically look exactly the same in gameplay as they did in that trailer. If TvC was eastern anime styled, than MvC3 is western cartoon styled.
--Backgrounds will be lively. J Jonah Jameson is in a helicoptor in the background of the Daily Bugle stage shouting and pointing at the players. There's also a parade in the background that has huge air balloons of characters like Spider-Man and Viewtiful Joe. Servbots and Tron Bonne in the background of the Megaman Legends stage.
--"The flow of combat is just as intense and hectic as MvC 2, and all the hardcore elements remain intact. Three-on-three tag-team combat returns, complete with the assists and team building structure of the previous title. Veterans can look forward to alpha, beta, and gamma assist types, snapbacks, and hyper move cancels. Even if you don't know what a snapback is, you're still going to be able to pull of show-stopping aerial raves, since the team at Capcom is streamlining the process for executing advanced maneuvers."
--They want to maximize depth while minimizing complexity, so that's why they decided on TvsC style light, medium, and hard attacks.
--Uppercut move is further simplified from TvsC, it receives it's OWN button, called the "exchange" button. Now in addition to uppercutting, you can choose the direction you slam them in, and continue the combo (like slamming them into the ground)
--Catch to that is if your opponent presses the same exchange direction as you do in a combo, than they escape your combo and counter with their own. "This exciting rock-paper-scissors element complements the simplification of launching foes into the air, integrating a new fold of strategy for hardcore MvC fans to chew on."
--A sort of cross-over areal rave can be performed, where you can safely change your character in the middle of an air combo, using the exchange button. (I'm assuming this works like tvc but the article doesn't exactly specify)
--Story mode is being slightly improved, with "beginning and ending story bookends, along with in-game events to keep it fresh in players' minds. Producer Ryota Niitsuma insists that though this story is better than in other MvC games, it doesn't steal the spotlight from the action."

--Captain America, Felicia, Deadpool, and Dante confirmed. Though no screen shots are given of these new characters, they do have small bios.
--Cpt. America: "This founding member of the avengers returns with his indestructible shield to deliver combatants to justice. He preserves most of his handy move-set, complete with deadly shield-a-rang tosses and evasive cartwheel maneuvers."
--Felicia: "Capcom's catgirl returns with her claws out to deliver quick and nimble combos to anyone distracted by her jiggle physics for too long. She is also able to summon a helpful little catgirl partner to double her threat."
--Deadpool: "Deadpool has the ability to teleport around the battlefield, but do it too many times and his device will backfire to hilarious results. Even breaking the fourth wall, Deadpool's special consists of beating down opponents with his own life bar."
--Dante: "He may be based on the young Devil May Cry 3 protagonist, but this Dante comes equipped with the best moves from the entire series. He can juggle rival fighters with his dual pistols, close distances by sliding on his knees while playing Nevan (his guitar weapon), and even activate his deadly Devil Trigger mode to increase his speed and power."
--Chris: "This BSAA agent brings over every weapon he can carry from Resident Evil 5 into Marvel vs Capcom 3. Chris devastates opponents with his pistol, shotgun, submachine gun, magnum, satellite laser, and grenade launcher (complete with fire, ice, and electric rounds). He also has a slide attack utilizing his electric baton."
--The Hulk: "Bruce Banner returns in his pissed-off form, and somehow he's even more monstrous than before. This green juggernaut is still sluggish, but his immense power and earth-quaking special make him a good bruiser for your team makeup."
--Wolverine: "Logan's claws ravage everything unfortunate enough to stand before him in brilliant swipes of color. His trademark Berserker Barrage move return as both an assist move and a special, making him a perfect main for your team and also a menacing assist character."
--Morrigan: "Darkstalkers' seductive succubus continues the battle with all her otherworldly moves. She catapults opponents skyward with a gigantic spear summoned from the ground and delivers flying reverse pile drivers."
--Iron Man: "Sleeker and slimmer than MvC 2's Tony Stark, this iteration of Iron Man better reflects his current style in the comics. The gold and maroon superhero's gigantic laser cannon still makes for a great assist, and his jet-boots make him ideal for aerial maneuvers."
--"If you were disappointed that you didn't see certain no-brainer Capcom characters in Tatsunoko vs Capcom for the Wii, don't give up hope. Niitsuma confirmed that big characters like Dante were saved from Tatsunoko for Marvel vs. Capcom 3."
--MvC2's cast recycled 15years of backlog and that's a large reason why it had such a big cast. "The morrigan you saw in 1994's Darkstalkers was basically what you saw in 2000's MvC 2."
--MvC3's characters all started from scratch.
--Capcom is paying a very large attention to detail to make sure all the characters are very in-character and act like themselves.
--GI raved about the graphics for a good paragraph, apparently lighting is superb and iron man's armor has reflections.
--GI seemed very impressed with how Dante was represented in the game. "His cockiness and bravado shines through in every action, doing the white-haired badass justice."


They want to maximize depth while minimizing complexity 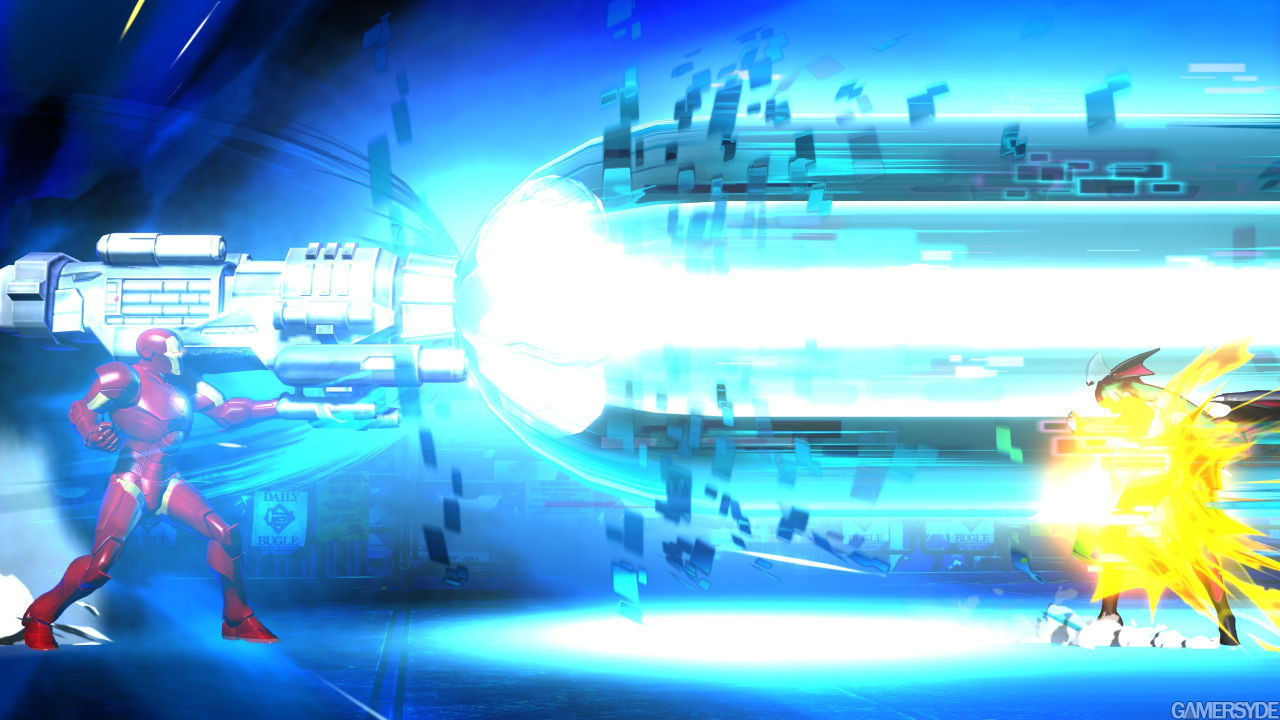